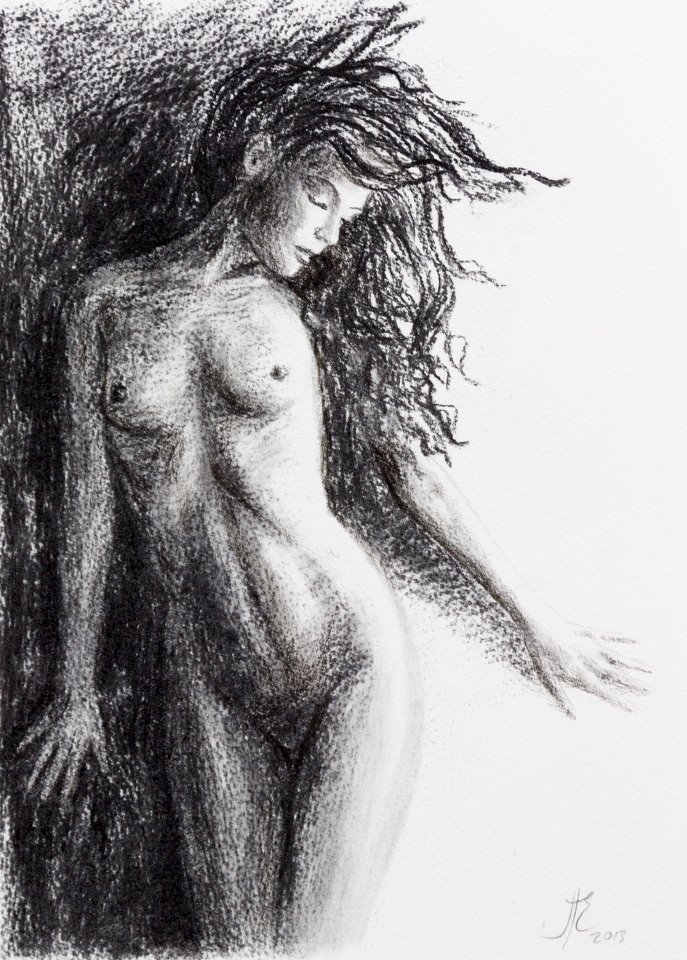 After the Czechoslovakian soldier left Celeste, he swore he would not see her again; consequently, for several days he struggled with the light whisper of her kiss. He relived the scene of his lips barely touching hers, over and over again until his body would ache, tingle, with unspoken sensations. He found himself doing stupid things, and not paying more to details in his duties. In the end it left him more confused, and wanting her more. Several days had passed, when Valis had had enough, of the Indian cowgirl invading his every waking thought. For some reason he kept having strong thoughts about returning her weapons.

Tonight the thought of giving back her slingshot and knife, was overwhelming him. Since he couldn’t sleep, he quickly dressed. Left his home with her weapons, and decided with determination he was going to just sex her, and discard her afterwards.

It didn’t matter to him if she was married or not, he was going to do her!  He found himself in front of her school, at 2:00 a.m. in the morning debating with himself.  What the hell, am I doing?  Why the F*&%, am I so intrigued by her?  She isn’t that pretty, she’s moody, rude, dangerously strong, but yet there is something special about her, like earth, and a kindness that I can’t explain. Not to mention, she has a banging body, that fit perfectly to mine?  The minute he thought the words his joy stick rose!  Frustration began to enter Valis’s thoughts when he popped off,  Oh, boy, even you are under her spell, damn it, man, what the hell is going on here!  Valis pounded his fist on the steering wheel of his truck. When he got his composure under control he realized how late it was, and how silly he must look beating up his car. Then a wicked thought invaded his mind, and without cause he grabbed her weapons on the passenger seat and opened his door, shutting it lightly. He scanned his trained eyes towards the building. The thought immediately came to him to shimmy up the wall to the rooftop.  The minute he thought it out he found himself climbing the wall!

Nothing prepared him for the sight he was about to see as he shimmies up the schools wall in stealth.  When he reached the top of the roof he saw Celeste’s nude figure glowing under the half moon’s light. The rays of the sun perfectly caressed her body allowing him to take full advantage of viewing her quietly.  Oh, Cheri, you are truly beautiful!  He whispered. Every part of his body was humming with electrical currents, as he soaked in the beauty of her golden body. What is she thinking, sleeping outdoors like this? Why does she not sleep, in one of the many rooms?  His mind suddenly went blank. Gently he bends down on his knees to stare silently at her for forty minutes.

His next move, was his undoing.  Mr. Sex-Pistol, became uncontrollable when he picked up a long blond strain of her hair, and tickled her nose with it.  He sparkled to himself as he watched her wave her hand lightly across her nose.  He so wanted to giggle out loud, but refrained.  Deciding to torment her a little more, he tickles her again with the strain of hair. Celeste wiggled her nose like a rabbit, then tried to swat away the bug again.  This time Valis couldn’t control his laughter, he chuckled lightly out loud, waking Celeste up.

Celeste’s eyes immediately opened, to the smiling captain. “What the HEY, DUDE!” She shot out, in an Indian tone at Valis. “Awe, Cheri, me thinks I have never seen anything as beautiful as you, goddess of the moon!”  Valis snickered devilishly. Celeste didn’t understand his comment until she watched his hungry deviance eyes scan her naked body.  She grabbed her sheet, and covered her body.  Her head was swimming with thoughts of how he got up to the rooftop, and knew she slept under the stars.

She recovered from the shock of seeing him.  With haste, she told him slowly, and clearly in a angry southern drawl tone. “Dude, how’d the heck, did you get up here?  And what time is it?” “Shush, or you will wake everyone up. It is 3:00 a.m.” Valis offered mischievously. “Okay, slick, let me see how you got up here?” Celeste stood up with her sheet covering her body.  She took hold of the captain’s hand lead him to the edge of the rooftop.  Then pointed to the possibilities.  Valis smiled, and showed Celeste where he crawled up the wall.  He then turned to look into Celeste’s amused eyes. “That’s wicked dude!”  Celeste praised the captain as she scanned the tall brick wall taking note where he could have placed his hands.

Valis was lost, her smile was breathless. Her tone of voice told him she was impressed. If that didn’t grab his attention enough, she had carelessly dropped the sheet.  Put her hands on her hips, and smiled at Valis, “That’s pretty good dude, pretty good.”  Valis’s eyes widen with excitement as she exposed her nude body to him, and the people who walked the late night street, freely. Valis could no longer control himself, he pulled her nude body into his. Celeste’s eyes broaden. “It is time Cheri, only you and I, oui?” Valis lightly mumbled to her. Celeste, realized her folly of dropping the sheet, when she felt the hardness of the soldier.  Oh, Nuts!  What have I done…

2 thoughts on ““Awe, Cheri, me thinks I have never seen anything as beautiful as you, goddess of the moon!””